The HEUFT LAMBDA-K convinces as a single-lane complete solution consisting of conveyor mechanics and a multi-segment folding rejector with its variety of applications for the upright rejection of empty and full containers in a very confined space. It makes a valuable contribution to line optimisation, either directly or integrated subsequently, as Part 1 of our new series on this subject shows.

From a single-lane conveyor via a rejection diverter with up to 16 individually fold-out segments which form a harmonious rejection curve, directly onto only one rejection lane instead of a multi-lane rejection table – this is how the HEUFT LAMBDA-K works! The kit which is made up of standard components and which diverts empty and full containers upright saves space and can be easily integrated not only into new but also into existing filling and packaging lines.

Even in high-speed operation, bottles, jars or cans are safely rejected, stabilised and evacuated without falling over. This even applies to PET full containers with petaloid bases. Depending on the application, the vertically rejected containers are then conveyed to a collection table or – for example in distribution operations – to a machine. And there is a wide variety of applications:

For example, when replacing large carousel inspectors with compact linear systems such as the HEUFT InLine II IS all-surface empty bottle inspector, the HEUFT LAMBDA-K no longer requires any complicated modifications to the conveyor surroundings: the single-lane rejection belt can be directly connected to existing conveyors in a space-saving manner. Reusable bottles which have been rejected due to contamination can then, for example, simply be sent back to the washing machine.

For the sorting of empties HEUFT LAMBDA-K systems connected in series implement a type-specific single-lane rejection of returnable containers which are not suitable for production: Current production bottles go straight on to the empty bottle inspector and finally to the filler while the first rejector redirects, for example, foreign bottle type 1 to the rejection lane, the second foreign bottle type 2 and the third one as well as the fourth one the other types of production bottles which are not currently being used.

The compact all-in-one solution is practically predestined for an effective filler/closer sampling. At full production speed, it rejects the bottles, jars or cans one after the other in an upright position. On the single-lane rejection conveyor, the samples then remain in the exact order in which they were removed from the production stream. This way, you never lose track of them.

Another typical application is the rejection of containers with too little or too much content directly behind the filler. The space available in this area is often so limited, especially in existing lines, that conventional rejection systems with large rejection tables do not fit in. The HEUFT LAMBDA-K does however because it conveys the containers directly onto the slim rejection lane without any detours.

Furthermore a fully automatic test container loop can be realised which makes manual interventions during the regular checking of the detection performance of HEUFT devices superfluous. The rejection lane is connected directly to its outlet for this purpose. There the test containers wait at the re-entry point until the next request signal from the inspector arrives. Then the test containers, prepared with typical faults and foreign objects, are scattered into the production stream, where they are then identified as defective by the respective inspection system, so that they are gently conveyed around the bend back to the compact waiting lane, where they remain until the next self-test round.

These are by no means all the areas of application for the clever combination of belt mechanics and multi-segment folding rejector. The HEUFT LAMBDA-K can also be used for numerous other rejection applications in order to optimise complete filling and packaging lines. HEUFT finds and implements the right solution with the necessary line competence, good ideas and smart engineering. 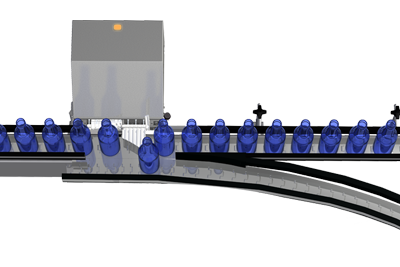 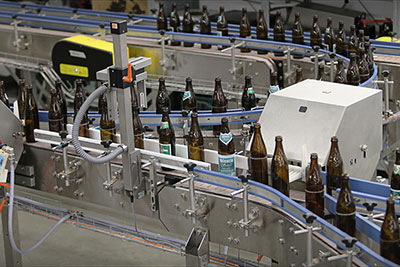