In a confined space: "HEUFT is up and running!"

HEUFT SYSTEMTECHNIK GMBH has installed a new empty bottle inspector in a very small space at the Franconian family brewery of Georg Meinel.  The bottle transport was optimised at the same time.  The result:  the detection reliability of large facilities and a considerably improved filling process.

"Quality is simply our foundation," explains Gisela Meinel-Hansen.  "This is what has been handed down to us and what we have learned ourselves."  Not only does this apply to the ingredients and the brewing methods of the award-winning Meinel beers but also to the bottle pool and filling process of the family brewery in Hof, Upper Franconia.  "When all this is right," knows the young lady who is master brewer, beverage management expert and beer sommelier, "then you have fallen in love with the raw materials and the technology."  Top quality barley, hops and brewing water are just as crucial as an effective quality assurance system in the bottling hall. 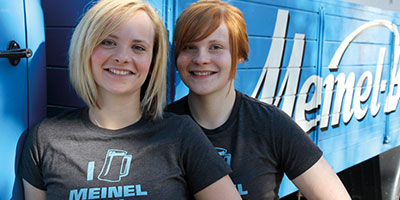 Therefore the 13th generation of the traditional brewery relies on best quality local raw materials from controlled sources and a modern empty bottle inspection from the technology leader in order to guarantee both.  "We invested in our new inspector in 2014," explains Gisela's sister master brewer Monika Meinel-Hansen.  The old carousel machine could only inspect the base and finish areas of the returnable bottles – it could not detect quality defects or safety risks on the sidewall.  "Then the finish camera broke as well and we couldn't find a suitable replacement.  Therefore we said:  'We want something new to be on the safe side'."

A modular high-performance system was chosen which has proven its worth in numerous large plants for the continuous complete inspection of up to 72,000 empty bottles per hour and therefore also achieves maximum detection reliability in lower output ranges:  the HEUFT InLine.  The sisters, otherwise known as the "beer fairies", saw it at a "chum's brewery".  Monika Meinel-Hansen remembers:  "And he was extremely satisfied."  Their interest in the device was correspondingly high.  However it was important that it also fitted in:  "We haven't got a lot of room in our bottling hall, the distance between the washing machine and the filler is pretty tight," in fact only 2.35 metres.  It is good that the standing surface of the compact straight-through system is just one square metre.  The continuous examination of the complete container volume is possible with only one module for an optical sidewall inspection at line speeds of up to 36,000 bottles per hour.  "We bottle two to three times a week and have an hourly output of around 5,000 bottles," explains Monika Meinel-Hansen.  Therefore a slimmer device version which is only 1.75 metres from the infeed to the outfeed was sufficient.

However even more had to be taken into consideration during the planning, project planning and implementation in addition to the extremely tight installation position:  on the one hand it had to be ensured that the empty bottles were transported without impact pressure within the inspection system – with a certain distance between the individual containers for full detection reliability.  And on the other hand it was important to guarantee that the filler had a constant and steady supply without large gaps in the bottle flow.  Otherwise there is a risk of annoying stops and at worst even dangerous glass breakage.

Continuous supply to the filling machine 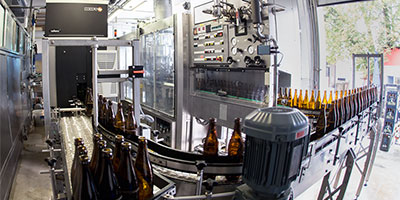 The solution:  separating the washing machine from the inspector, a new single-lane conveyor over the old distance, the gentle bringing together of the bottles in the HEUFT InLine and an additional new lane with catch-up control from there to the filler.  Monika Meinel-Hansen is sure that "we have come up with the optimum solution here.  We were able to fit in the inspector incredibly well, almost in the same position, and were even able to lengthen the conveyor so that we now have a better, more even, continuous filling process without long stops."  Because the newly integrated HEUFT speedy conveyor control system between the empty bottle inspector and the filler closes gaps smoothly without hard collisions which can cause noise or even glass defects.  Therefore the master machine is constantly supplied with error-free empties.

Whether residual lye or foreign objects on the base, label remains, scratches and inclusions on the sidewall or defects in the finish:  the compact inspection system even detects minute safety risks and quality defects during the all-around inspection of each individual empty Meinel bottle.  This even applies to scuffing and other faults covered by structures.  Innovative illumination and camera technologies ensure this together with the HEUFT reflexx real-time image processing system.  The ingenious colour ring inspection of the complete finish sealing surface not only makes chips visible but also faults without material loss such as thermal cracks and stress cracks.  A compact rejector removes faulty empty containers reliably before they can be filled.  Consistent monitoring including reject verification provides additional safety:  the conveyor is stopped should the fault rejection not function, i.e. due to a compressed air failure, so that the bottles which have not been rejected can be removed by hand.  The HEUFT PROFILER elemental PDA tool collects important operating figures and controls test bottle programs for regularly checking the detection reliability of the empty bottle inspector.

The introduction and commissioning were quickly dealt with:  "We assembled the device, took three days to install it and after that it was up and running," recalls the master brewer.  This was also particularly important to her:  "Something like this must not drag on too long."  After all the performance of the family brewery should not suffer:  "Output has to be high during the filling process.  That was true in our case.  We completed and said:  'HEUFT is up and running!'  And we've been happy ever since."  This is due to the user friendliness of the empty bottle inspector:  "It's hardwearing, stress-resistant and gets on with everyone."  In addition "maintenance is fairly easy, in other words, we don't have to do much."  Up to now not a single wearing part has had to be replaced.  If the worst comes to the worst the online connection to the HEUFT TeleService provides fast and targeted support around the clock.  "We've used it now and then in order to ask a question or two." 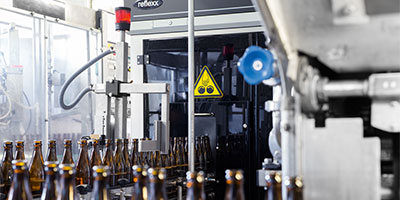 However that is only rarely necessary during the daily filling operation.  After all the two sisters and their complete team have been optimally trained.  Everything needed in order to ensure the maximum availability of the linear empty bottle inspector has been "explained brilliantly" by a HEUFT trainer according to Gisela Meinel-Hansen.  And that "in two steps – once for us girls and once for the men."  Except in this case it was the girls "who wanted to know everything about the technology down to the smallest detail."  Because as the "master brewers with heart and soul" responsible for the investment they are both interested in everything concerning the high-tech solution.  However basic user knowledge suffices for the other employees:  Gisela Meinel-Hansen knows "of course it is also important to include someone who may be a butcher and doesn't have any brewing qualifications but who works in the bottle filling section and does that really well.  Everything has to be explained to him too in such a way that he can also understand it.  There are several generations and people with different educational backgrounds in the company and in this case they have all been closely linked with one another.  There was something for everyone at every level and the ultimate goal that everyone who should operate the machine could was achieved.”

Therefore a sustainable in-line quality check of the Meinel bottle pool while maintaining high productivity is always guaranteed.  Sixteen different beer specialities such as "Absolvinator", "Classic Pils", "Märzen" or "Mephisto Rauchbier" and their own soft drinks of the "Clarella" brand end up in 0.5 litre NRW or 0.33 litre long neck bottles which the HEUFT InLine inspects continuously before the filling process.

This also applies to the women's beer with which the Meinel sisters caused a sensation throughout Germany – not only because of its unusual name:  the spelt pale ale that "hop fairy" Gisela and "yeast fairy" Monika Meinel-Hansen created together with the "malt fairy" Isabella Mereien from the "Drei Kronen" brewery in Memmelsdorf in Upper Franconia is called "HolladieBierfee" (upsa-daisy the beer fairy).  The orange-red strong beer fully packed with colourful malt and aroma hops and twice fermented with Bavarian wheat beer and French white wine yeast is a real "ladykiller":  even the ladies who usually prefer Prosecco, Hugo or Aperol Spritz enjoy its taste.  The fresh fruity "beer by women for women" is also a great success with the men.  The HEUFT InLine contributes by ensuring that the big seller brewed according to the Bavarian Purity Law also remains pure, unspoilt and safe to drink in the bottle.

Conclusion:  a good cooperation and a convincing result

"This is one of the first of these machines in the smaller area," explains Monika Meinel-Hansen.  "And it has worked out well."  Because an inspection quality is achieved in the Meinel brewery in a confined space which usually only large companies have to offer.  In addition the complete package comprising empty bottle inspector, optimised conveyor environment and conveyor control system has improved the bottle flow and because of this the complete filling process "so that we are more satisfied than before."  Her sister Gisela is also "pleased and happy with the filling line which is there now and also with HEUFT."  This is not just because of the technological advantage of the leading supplier of modular systems for an in-line quality assurance.  The handling of the ambitious project was also able to convince her:  "the cooperation with HEUFT was straightforward in my opinion – clear and structured from the beginning to the end.  It worked!"