No one wants mosquitoes or flies in their drink.  Yet non–returnable bottles in particular are contaminated with such foreign objects again and again.  HEUFT has developed a special optical method in order to identify and reject these in–line.  It is impressive due its superior detection reliability even in the areas of the container which have been deemed impossible to be inspected until now.

Mosquitoes or flies in drinks bottles are anything but pleasant.  They spoil the drinking experience, give a feeling of disgust and threaten the image of the brand.  Those who have had such an insect in their beer will not choose the same product again.  It is not uncommon for containers to be contaminated with such beastly foreign objects particularly along non–returnable lines which do not have an empty bottle inspector.  They can already enter the bottle at the glassworks.  Or when the unsealed container is on its way to the filling plant.  They are often not flushed out in the rinser.  Contamination along the line cannot be excluded either as long as the container is open.  Therefore it can happen that contaminated bottles are filled and reach the consumer.

Those who have a full container inspector which detects foreign objects whilst still along the line are sitting pretty.  There is a great demand for such solutions.  However conventional devices often experience difficulties in detecting the little pests – particularly when they are very close to the bottle base, float freely in the product or cling to the container wall.  Therefore HEUFT has developed a system which reliably identifies mosquitoes and flies but also foil remnants, bits of paper and mould in bottles filled with transparent liquids and even covers areas of the container which are generally considered not possible to inspect.  The HEUFT spotter SF even consistently tracks down contaminants which are hidden behind the curved dome and the base edge or covered by other container structures.
Several pictures are produced of the complete neck, body and base area using a sophisticated illumination and camera technology in the infeed and the outfeed.  The conveyor chain in the HEUFT spotter SF is so narrow that the bottle base juts out to the left and right of it in order to provide an unrestricted view.  A servo–controlled belt, the height and passage width of which can be adjusted at the push of a button for fast and easy brand changeovers, aligns the containers on their way to the detection units in the outfeed so that they can be examined there again from another angle.

A combination of an optical and a radiometric inspection

This optical method for a sidewall inspection and an optimised base inspection can be combined with a unique, pulsed X–ray technology for even more safety.  As a result the HEUFT eXaminer XO full container inspector is also capable of tracking down solid foreign objects on the bottom of the bottle in addition to insects, mould, foil remnants and bits of paper:  even glass splinters and metal filings which can hardly be seen with the naked eye are identified.  For this X–ray strobes produce several pictures of the containers – namely each from another angle of vision:  an integrated belt drive also rotates the bottles in this case whilst guiding them through the device on a radiolucent conveyor chain.  This ensures that the longest side of the object to be detected is aligned at right angles to the X–rays at one of the detection modules at least and therefore can be seen in the processed and filtered pictures.
Whether HEUFT spotter SF or HEUFT eXaminer XO:  both inspection systems remove full bottles which have been identified as faulty consistently from the production flow.  Triggers and sensors follow each container to be examined through the complete device in order to rule out that one of them is not inspected.  However the monitoring process is not finished with that:  a reject verification also ensures that each bottle to be rejected is really removed from circulation.

Both HEUFT systems help to ensure that drinks contaminated with mosquitoes, flies and other foreign objects do not reach the consumer particularly along non–returnable filling lines without an empty bottle inspector. 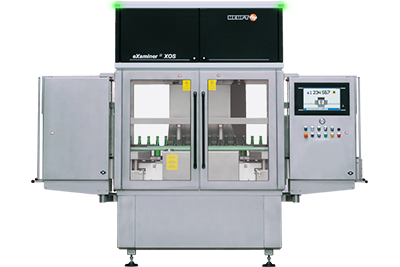 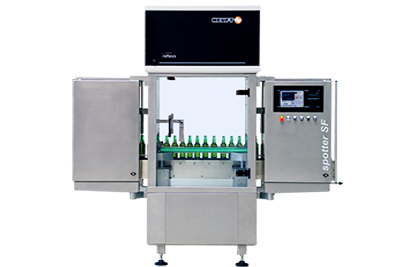