HEUFT @drinktec: simply that what the sector wants!

In-line quality assurance could not be easier.  Thousands of visitors to drinktec 2013 in Munich realised this in the middle of September.  They experienced a redefinition of the state of the art in inspection technology on the HEUFT SYSTEMTECHNIK GMBH stand:  the next generation of modular HEUFT systems with a groundbreaking user guidance which explains itself.  This was met with a positive response from the complete sector at the most important meeting of the worldwide beverage and liquid food industry.

The highlight was Amanda Tapping a star of the tech-savvy science fiction scene:  she is Colonel Dr Samantha Carter an astrophysicist specialising in particle research in the TV series Stargate.  And at HEUFT she is the new Chief Navigator who shows the user step by step what has to be done when and where in order to reliably detect even the smallest foreign objects in empty and full containers as well as numerous other quality defects in drinks packaging and to increase the efficiency of complete filling lines.

For this reason HEUFT integrated Amanda’s avatar in the intuitively understandable user guidance of the new HEUFT SPECTRUM II series and invited the well-known actress, director and producer to drinktec 2013 in Munich.  Consequently the visitors to the exhibition could experience her personally and not just virtually.

The new Chief Navigator, together with many other useful tools and features, makes quality inspection when filling drinks simply easy.  The operator of the next generation of highly automated HEUFT systems becomes a guided user:  Amanda assists him and provides him with audiovisual support during all the work at and with the device.  Therefore he can operate it safely and free from errors without any previous knowledge.  The result:  a clear advantage in terms of detection accuracy, operational reliability and line efficiency.  And that is obviously precisely what the international beverage industry wants.

The crowds of visitors on the largest HEUFT stand ever and their positive feedback are impressive evidence of this:  whereas the Munich exhibition organisers reported a strong increase of 14 per cent in the number of visitors compared with the last drinktec four years ago it was considerably higher for HEUFT.  Thousands of top-class industry representatives from all over the world responded with real enthusiasm to the high performance and user friendliness of the new developments.  The international HEUFT exhibition team was delighted with the keen interest in the groundbreaking innovations.  The already high expectations were surpassed by far.  The first business deals were even made on the HEUFT stand during drinktec.

HEUFT met with a positive response once again from the international beverage industry and redefined the state of the art with the new device generation, its self-explanatory HEUFT NaVi user guidance and Chief Navigator Amanda Tapping.  Therefore the in-line quality assurance of product and packaging when filling drinks is made simply easy!
Further details about the drinktec innovations can be found in the latest issue of the HEUFT technews. 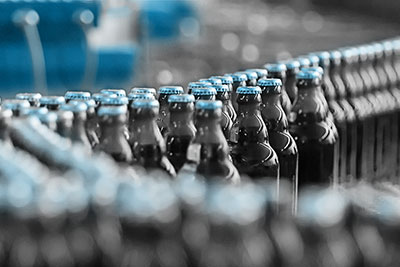