Finding in time instead of recalling afterwards!

Glass splinters in baby food, metal fragments in food cans and small pieces of plastic in chocolate: there are always spectacular recall campaigns when the safety of food is threatened. These are costly, damage the image of your brand and are avoidable. With HEUFT you can remove contaminated and improperly packaged products before they can reach the market. This saves you from food recalls.

There were 40 cases in Germany alone up to the end of May of this year: food producers had to withdraw their products from the market. According to the German Federal Office of Consumer Protection and Food Safety (BVL) foreign objects caused the product recall in more than a third of these cases closely followed by marking faults and microbial contamination.

As a result there are on average almost 100 food recalls year after year in the Federal Republic of Germany. The Rapid Alert System for Food and Feed (RASSF) recorded more than 800 withdrawals and recalls in 2015 throughout the EU. And in the USA their number has even almost doubled within ten years according to a study carried out by the reinsurance company Swiss Re: whereas 340 food products were recalled there per annum between 2002 and 2004 this figure already amounted to 676 between 2012 and 2014.

An increasingly globalised and fragmented supply and process chain as well as ever stricter laws and regulations regarding food safety are amongst the causes of this high number of cases. Every single one of them can be very expensive: seven-figure recall costs are not uncommon – more than 100 million dollars were due in five per cent of the examples researched by Swiss Re. In addition the reputation of the brand is seriously threatened. Therefore transparency and openness are extremely important with regard to the communication and handling of a product recall. 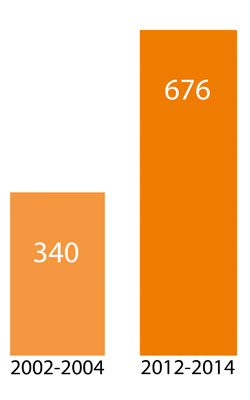 Almost doubled in ten years:
drastic increase of food recalls in the USA.

It would be much better though to prevent it from happening at all: most of the causes for recalls can be found and eliminated before the food in question arrives in the shop – with HEUFT systems for a precise in-line quality inspection. Not only reliable metal detection is possible independent of container material and product effect. Stones, bones, plastic and sharp-edged glass splinters also become visible. The empty and full container inspectors of the technology leader prove their impressive detection and rejection reliability day after day on numerous food, dairy and beverage lines.

The reliable in-line detection minimises the risk of injury caused by foreign objects which is one of the commonest, most widely known and threatening reasons for a recall. However HEUFT systems also track down other safety and quality defects in good time. Special modules for checking different features and verifying codes prevent, for example, incorrectly marked products reaching the market which could threaten the health of allergy sufferers. The extensive leakage check for full containers reduces the risk of the microbial contamination of sensitive drinks and food products.