Hungary's largest winery relies on the highly automated HEUFT systems for the precise inspection of empty and full containers in order to fill its wine specialities into perfect returnable bottles and ensure the quality and integrity of the final product sustainably despite increasing production.

"From zero to 14 million!"  This is how much the bottle output of what is now the country's largest winery has risen since its foundation 26 years ago in Badacsonytomaj on Lake Balaton.  "In Hungary, with its population of ten million," says Péter Varga, owner and managing director of Varga Pincészet, "this is a big deal".  And so big that "we also needed a larger filling line".  Up to 14,000 bottles per hour are now filled with wine there – a speed at which the human eye can no longer keep up with when it comes to checking the safety and quality of each and every single one of them.  "That's how we knew," Mr Varga says, "that we needed an automatic control system."  And with a returnable portion of over 80 per cent which his company uses not least from an environmental point of view, "such a control has to be much stricter than that of wine producers who only operate with new bottles".  Because the risk that "they will come back damaged" is of course much higher with such returnable bottles. 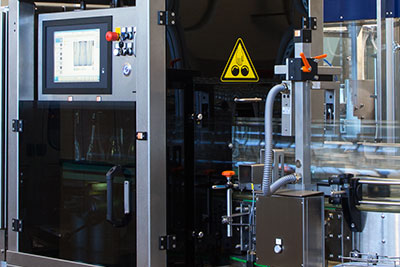 Consequently a genuine empty bottle inspection was required which completely covers all the surfaces of every single one of them in order to find such damage everywhere and only allow faultless containers to pass through to the filling machine.  At first the search was on in Hungary for suppliers providing suitable solutions with the desired performance "but we did not find any other systems only those from HEUFT".  Other international competitors were not convincing either:  "They did not talk about themselves but always only about HEUFT" – and claimed that they were able to supply the same even cheaper.  However when checking the technical details it soon became apparent that their products could not achieve "the HEUFT quality" which was "exactly" what was required.

So it is no wonder that Varga Pincészet decided in favour of the HEUFT InLine II IR.  The model for entry into the new generation of empty bottle inspection examines the base and finish area completely without gaps on less than one square metre of floor space.  An additional detection unit in the outfeed of the compact system ensures an exact optical 360° sidewall inspection even at higher line outputs and with smaller gaps between the bottles.  In this way risks to the quality and safety of the final product are also found which "we have not detected up to now," confirms Mr Varga.  Two HEUFT mono rejectors transport the respective bottles either upright onto a rejection table or directly into the waste glass bin depending on how severely they are damaged or contaminated.  And the audiovisual HEUFT NaVi user guidance makes the reliable operation of the modular system based on the highly automated HEUFT SPECTRUM II platform simply easy:  "I'd go as far to say that even a ten-year-old child would have no problems operating it."  Above all the program changes, which are so important for the producers of numerous wine specialities of different grape varieties, are fast and straightforward according to the managing director of the winery. 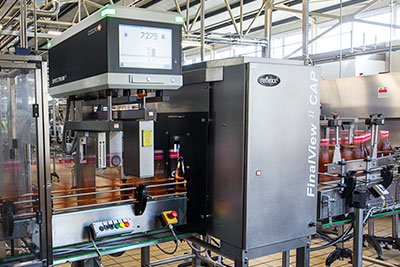 Transport and detection units adapt automatically to the changed bottle format while the HEUFT NaVi supports the user step by step during a changeover in the same way as the HEUFT FinalView II CAP which Varga Pincészet now uses for a full container closure inspection at the other end of the new filling line.  This also applies to the X-ray measuring bridges for a fill level detection on the HEUFT SPECTRUM II VX to which the particularly compact add-on module for safeguarding the quality and integrity of wine corks, screw closures and capsules is connected.  Regardless of whether they are completely missing, incorrectly positioned or defective or whether the logo and colour do not match the brand being produced:  faulty wine bottle closures are reliably detected during the optical all-around inspection.  And the roll-on inspection for screw closures examines the presence, continuity, characteristics and profile depth of the thread turns as well as the integrity of the tamper evident rings so that only tightly and flawlessly sealed wine bottles which can be opened easily and safely can pass through.  All the others are removed reliably from the production flow by another HEUFT mono rejector.

Good decision to safeguard the product quality of Varga wines

The company is just as happy with this performance during daily operation as with the project planning, installation and commissioning of the two systems for the quality inspection of empty and filled wine bottles.  The process which was managed by HEUFT AUSTRIA GMBH (responsible for Hungary) was "very well planned" says Mr Varga and "everything went extremely smoothly".  And just as quickly as previously announced "which is very important for us" because otherwise unexpected production downtimes would have occurred.  His conclusion is correspondingly positive:  "HEUFT did a good job and we made a good decision."  Therefore the winery from Balaton can provide the product quality which has made it great even with a further increase in output.