The numerous guests attending the 40th anniversary celebration of HEUFT SYSTEMTECHNIK GMBH not only looked back but above all also to the future. Long-standing associates and partners came to Burgbrohl for this purpose – among them Malu Dreyer the Minister President of the Rhineland-Palatinate and a real futurologist.

"What seems crazy today will be commonplace tomorrow." This is the thesis put forward by Michael Carl at the official celebration on the occasion of the 40th anniversary of HEUFT SYSTEMTECHNIK GMBH at the end of August. And what was unimaginable only a few years ago is now indeed part of everyday life. This not only applies to the ubiquitous smartphone or the self-driving car already registered in Switzerland but also to modern HEUFT SPECTRUM II QS systems which think, support the user actively and even speak to him. And also to the very first solutions for an automatic fill level detection and targeted rejection of unmarketable bottles which Bernhard Heuft already devised over 40 years ago.

Just like devices with monitors which the company he founded was the first supplier ever to introduce these to the bottling hall as early as 1982 – such innovations were ridiculed at first or even declared crazy. In the meantime they have long since become a generally accepted standard. In this respect HEUFT is perfect proof for the not so crazy introductory thesis of the talk given by futurologist and director of the Leipzig think tank "carl institute for human future": "We have seen an example of this application in the history of this company. It's very impressive what is being achieved here!" 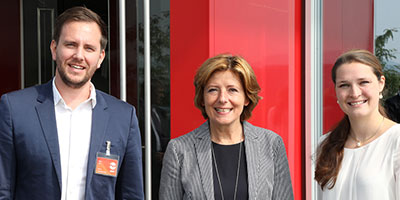 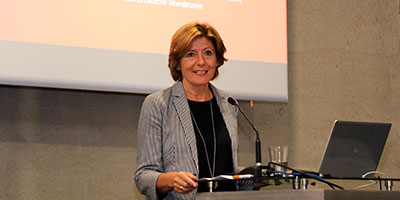 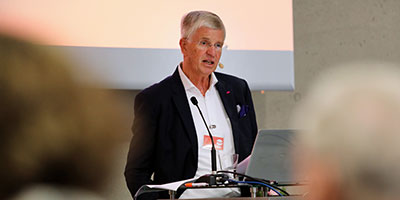 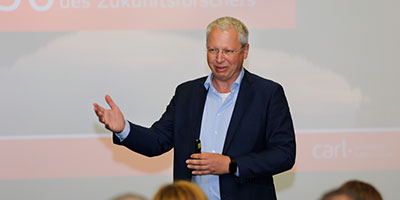 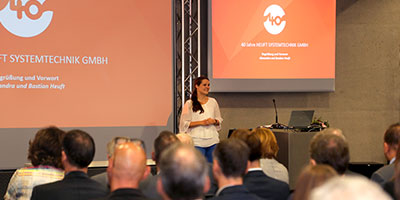 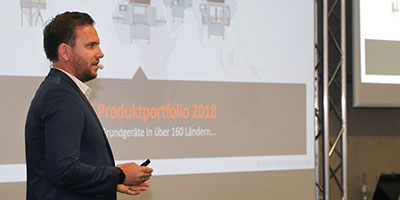 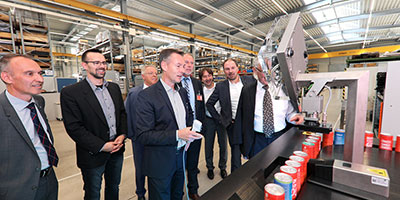 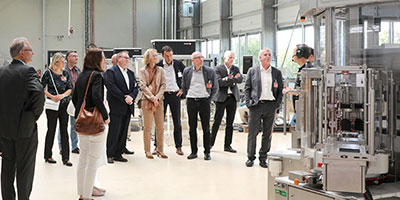 Far-sightedness and courage right from the start

Malu Dreyer the previous speaker also emphasised this: the Minister President of the Rhineland-Palatinate regards the "far-sightedness and unbelievable courage" which the company founder as well as the new generation and all the employees of the medium-sized family business have demonstrated over the past 40 years as "something very special and an excellent visiting card for the Rhineland-Palatinate as a business and employment location". The head of the state government who travelled to Burgbrohl especially to extend her personal congratulations stressed that the innovations which HEUFT brings to market "are products of the highest standard": "I wish you this courage and innovative drive well into the future!"

That this has prevailed at HEUFT from the outset was underlined by Dr Karl Tack long-standing HEUFT associate and former managing partner of Gebrüder Rhodius GmbH & Co. KG (which has been bottling mineral water in Burgbrohl for eight generations) in his review of the eventful history of the company founded in 1979: "As President of the Verband Deutscher Mineralbrunnen (VDM - Association of German Mineral Water Producers) I would like to offer my warmest congratulations along with special thanks for an extremely constructive working relationship. HEUFT has made industrial history, was and is a pioneer for innovative solutions and an indispensable partner for the beverage industry".

Long before the company was founded Karl-Hans Heuft, Technical Operations Manager at Rhodius at the time, used his son Bernhard Heuft "to solve problems during the filling process. The student developed the first bottle counter at Rhodius with a playful instinct and inventive genius," reported Dr Tack. And so successfully that a laboratory was set up there just for him for "system technology and innovation" in order to "solve a problem concerning the entire beverage industry" namely to detect and reject faulty bottles in-line.

The first prototype of a complete solution consisting of fill level detection and multi-segment rejection was integrated into the filling line of the mineral water producer soon afterwards. The VDM president recalled that many people at that time still considered this a crazy gimmick but "it was actually a breakthrough for beverage technology". This was the go-ahead for the foundation and "unprecedented development of a start-up made in Burgbrohl".

The company has not abandoned its consistent course of innovation since then. More than 500 patents prove this, among other things, for the unique pulsed X-ray technology for detecting foreign objects. CEO Alexandra Heuft, the daughter of the company's founder, emphasised in her welcoming speech that 20 per cent of the approximately 800 employees at the German production site work in R&D: "Research and development – that was and is our strength!" This no longer only benefits the beverage industry. HEUFT checking, inspection and labelling systems also ensure full product quality all over the world when filling and packaging food and pharmaceuticals.

Managing Director Bastian Heuft promised at the official anniversary celebration that HEUFT SYSTEMTECHNIK GMBH will also continue along this path for the next 40 years – with new and further developments which may seem crazy today but which will already be the state of the art tomorrow. "We want to make the world a safer place day after day with our products," said Bastian Heuft. "And why is that? Because we know we can!" 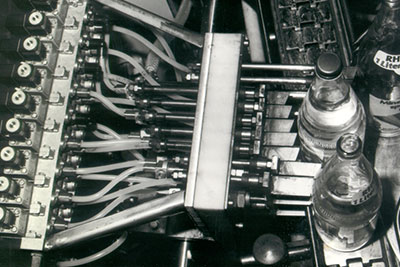 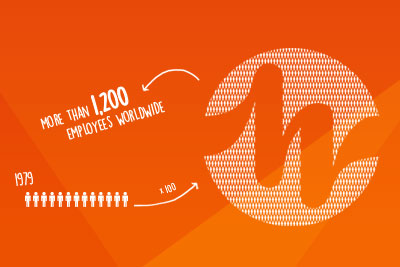