Competence in the smallest space

Smaller breweries know their requirements – HEUFT finds the technical solution.  Smaller production lines are also committed to high quality standards during the filling process.  The HEUFT InLine achieves a production output of 4,600 bottles per hour masterfully in this case.  The corresponding space for the innovative technology has to be calculated precisely in the course of this and installation resembles a jigsaw puzzle.  HEUFT SYSTEMTECHNIK GMBH accepts this challenge and proves:  "HEUFT ist Systemtechnik!"  It descends deep under the brewery yard of the Ferd.  Schumacher GmbH & Co. KG brewery in Düsseldorf with know-how and decades of experience in the beverage industry.

When visiting the bottling hall of the oldest Düsseldorf microbrewery it becomes immediately clear that flexibility and creativity are key concepts.  Because here tradition and state-of-the-art technology are combined in the smallest of spaces.  The HEUFT InLine empty bottle inspector also ensures optimal detection reliability over the shortest distance and reliably checks the quality of the pool of returnable bottles of the traditional "Altbier" (top fermented dark beer) brewery.  According to Sascha Brunow, the head brewer, the individual one litre bottles with swing tops, into which the established Schumacher Alt and the 175 year-old Schumacher 1838er anniversary beer are filled, are "the trademark of the brewery" and should therefore satisfy the highest quality requirements.
The decision in favour of the HEUFT inspection technology was made quickly:  "The way the company handled the challenges and its positive and optimistic approach were the decisive factors."  Special conditions arose in the Düsseldorf bottling hall from a structural aspect:  the project planning, assembly and installation of the HEUFT InLine empty bottle inspector with infeed check, finish, base and sidewall inspection had to be correct to the millimetre.  The clearance to the top was exactly one centimetre which corresponds to the width of a thumbnail.  Therefore precise and accurate work was a precondition.

In addition the empty bottle inspector had to be positioned in a floor space of only one square metre.  Transporting it into the bottling hall also proved to be difficult.  More than one hurdle had to be overcome in order to reach the depths of the bottling hall.  A challenge for the HEUFT team but not a problem:  the top, bottom and side parts were delivered completely dismantled and assembled on site.  Mr Brunow is fully satisfied with the result:  "Implementation was carried out without any problems or complications as already announced during the planning phase."

The brewer Andreas Schreiter is particularly impressed with the HEUFT technology:  "The device is unbeatable in practice.  All our employees operate the HEUFT InLine intuitively."  And Mr Brunow, the head brewer, explains:  "The menu navigation using the touchscreen is logical, explicit and clear.  The device itself runs trouble-free and is easy to use.  And the hygienic design ensures the best standards of hygiene with minimal effort."  The high degree of automation of the HEUFT InLine, low maintenance and the considerable saving in time due to the reliable rejection of all the faulty bottles ensure the continuous monitoring of the pool of returnable bottles.

The empty bottle inspector detects finish faults or glass splinters, which are hazardous to health, at the bottom of the bottle extremely reliably.  Furthermore the residual liquid detection makes sure that the empty cleaned bottles are free of lye residue before the filling process and can therefore be filled impeccably from a quality aspect:  "All the faulty bottles are being sorted out since the HEUFT InLine has been commissioned.  The test bottles which check the detection reliability of the device at regular intervals are also rejected without exception," explains Mr Brunow.

The conclusion:  HEUFT SYSTEMTECHNIK also ensures more product safety and more quality where space is limited with its modular system and unmistakable know-how.  Therefore smaller filling lines also benefit from the in-house developments and the experienced monitoring of the project by highly qualified project engineers.  According to Mr Brunow the "competence, care and friendliness" displayed during the implementation of the project have therefore had a decisive influence on quality assurance when filling Schumacher Alt.

Competence in the smallest space?  HEUFT knows how! 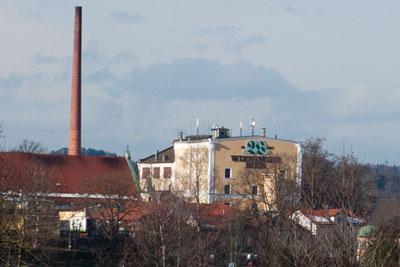