HEUFT introduced inspections systems with a monitor for filling lines for the first time more than 30 years ago and the HEUFT PILOT graphical user interface more than 15 years ago.  The company is now revolutionising in-line quality assurance again – with the HEUFT NaVi an audiovisual user guidance which makes the daily routine for the user simply easy and even speaks to him for this purpose.

Nobody can know everything.  No one has to be able to do everything.  And hardly anyone wants to struggle with things which he normally never needs.  Because life is complicated enough already!  The technology leader has created a new type of user guidance in order to make it easier for those who work with HEUFT systems and to ensure that they can do this unhesitatingly:  personalised and focussing on what is essential the HEUFT NaVi provides the respective user with individual support – he only sees displays and receives audiovisual explanations for that which is really necessary in order for him to carry out his work optimally.

HEUFT systems perform their tasks completely automatically during more than 99% of their operating time anyway.  Intervention by the user is therefore only necessary on very rare occasions.  However he can dispense with the time-consuming poring over of complicated manuals if this should be the case:  the HEUFT NaVi guides him!  He can find his way around the menu structure of the graphical touchscreen user interface right away.  Because it has been personalised, that is tailor-made for his specific tasks, abilities and rights – and so flat, organised and self-explanatory that he does not require any special previous knowledge.  Counter readings are clearly displayed and contextual messages, tools and assistants explain to him what has to be done when, where and in which order.

The user guidance has been given a face

This means:  the HEUFT NaVi speaks to the user!  A friendly voice explains to him step by step in simple words in his own language what he has to do.  In addition to this audio output in the machine user interface of the HEUFT prime full container check that of the HEUFT SPECTRUM II systems has also been given a face:  an avatar in the role of chief navigator guides the user directly and purposefully through the functions relevant to him.  The HEUFT checkPoints also make life easier for him should manual intervention be required:  the orange tags flash on the touchscreen as well as on each of the relevant mechanical components of the inspection system itself.  As a result it is clear at a glance where human intervention is required – in the same way as one would wish in the case of a car when a warning light lights up on the dashboard once again but nothing can be found in the engine to show what action is necessary in order to restore working order.

Purposeful and focussed on the essentials - the audiovisual HEUFT NaVi user guidance makes the daily routine for the respective user simply easy.  He does not see or hear what he does not know, cannot do or does not need in the first place. 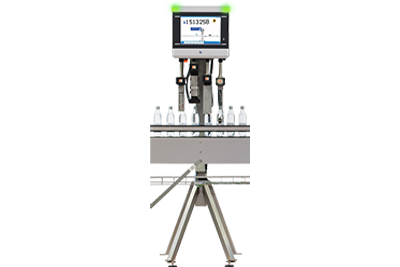